b ~ And sawdust restaurants with oyster shells; 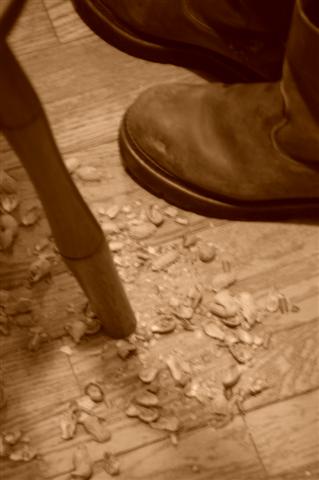 There was a time in my life when I was often asked to get on a plane
and travel from bookstore to bookstore. In my job as Trainer (about
fifteen years ago) I was assigned to locations all over the country
and was part of a team that opened up new stores. We would be there
for three weeks opening boxes, putting books on the shelves and
getting the new staff up to speed. No easy task, but one that I
immensely enjoyed. From the first Sort to the last I was always
nervous about going, and then once I got there I was never ready to
come home. Poor M, he never knew if I was coming or going. Good thing
the cat and dog were home to keep him company.

After I had been in the job awhile, I began looking forward to seeing
certain friends on these trips. I knew what kind of music they liked,
TV shows they watched, and without a doubt what books they liked to
read. Our days were filled with intense labor and non-stop demands,
but the evenings were for fun. When I packed my suitcase I made sure
to have clothes for both: t-shirts and sweats were standard for all of
us, but I made sure to include enough twirly skirts for our nights
out. Where we went to dinner was a source of planning and discussion.
The emails often flew fast and furious in the weeks before a Sort; we
stated our top choices as well as the joints that would rate as
acceptable. But once you get that many people together for that many
weeks compromise becomes the name of the game. Ever the peacemaker, I
was usually quite happy if there was something vegetarian on the menu.

I’ve opened stores in Plano TX, Bangor ME, Princeton NJ, and the World
Trade Center in Manhattan. And I’ve eaten in great restaurants in all
of those cities. Some of my friends (should I say “low places” or
would that reference to that song pass you by?) enjoyed taking us out
for line dancing, honkytonk and whiskey. On those nights when we
visited a bar that played country music I discovered it was easiest to
relax, slip outside myself and just take pleasure in being somewhere
other than at home.

Shedding your skin is never a complete transformation, who you are
deep down inside isn’t so easily cast aside. I know that one of the
reasons my friends could toss back shot after shot was because they
knew that I wasn’t. For I am The Designated Driver, it’s a role that
suits me just fine. I like knowing that I can help out in some way,
the dependable person who can get you out of a jam at 3 in the
morning–no questions asked. I think back to my time in those bars and
I can easily conjure up the sound of the music and of peanut shells
crunching underneath my feet. I remember fervently wishing for a broom
and a dustpan, ’cause somebody was definitely going to have to clean
those shells up.  Yet I walked on by feeling like I didn’t have a care
in the world. I knew that once the evening was over I’d be back in my
hotel room snug as a bug in a huge bed all to myself. But while we
were there we danced and danced.

Those memories with those particular friends are some of my sweetest.
If I had the chance to relive a certain time in my life, it would be
those years, hands down. I may not get the opportunity to stay out
late much anymore, but I still like to put on my boots and kick up my
heels when I get the chance. Though I still have to tell myself to
leave the dustpan and broom behind, it’s much more fun without them.