b ~ Rubbing its back upon the windowpanes 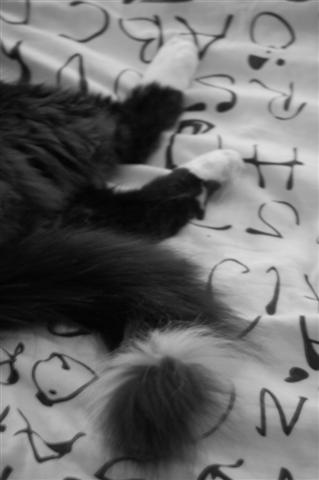 Looking back, I think there was one truth that defined my childhood: I
was never able to get a dog.

My grandmother always had little dogs, Chihuahuas and toy poodle
mixes. Her neighbor had an Irish setter that was chained outside. My
uncle lived a few houses down and had a dog that lived outside and
then eventually a few shih tzuish dogs that lived inside. My
grandmother’s last dog was named Gypsy, partly because she liked to
gallivant around the neighbor hood and visit.

We spent quite a bit of time at my Gram’s, she only lived just a few
miles from us. One of the draws for visiting was the chance to play
with the cats that lived outside. They were stray cats who lived in
the woods, but my grandmother fed them on her front stoop. I can still
hear her calling “Here ki-tee, ki-tee, ki-tee. Here ki-tee, ki-tee,
ki-tee.” When she did, Smokey, Tom and Sylvester (my favorite) would
come running from their hidey-holes, eager to see what she had brought
them.

One spring someone dropped off two little Manx kittens. The kids in
the area quickly dubbed them Mork and Mindy because of their strange
appearance. None of us had ever seen kittens without tails before. My
grandfather got such a laugh from watching the two of them play
together. Years after he would still tell the story of the German
shepherd that came galloping down the road, only to turn tail and run
when he saw both of these kittens with their backs arched and hissing.
They were actually very sweet and after much begging and promising of
the chores and quite possibly the moon, we were able to take Mindy and
the newly dubbed Midnight back to our house. They lived outside and
could come in to the basement if it got truly cold. I believe we had
them for a very long time. After which came Muffin, Sunkist, the white
feral kitty we trapped in our shed and tried to domesticate, and then
Cameo, a beautiful black long haired cat. As with the others she lived
outside and then eventually had kittens. There was Whisperkitty
(gray), Cameron (black), Tigger (orange) and my favorite, a spotted
girl named Lilybug. I took her name from one of my favorite books at
the time.

In between these cats there were several guinea pigs, a hamster and
then a parakeet—which I took to college with me. But we weren’t
allowed to have animals in the dorm, something that just about did me
in. After a few years at school, my roommate and I decided to get an
apartment. Our very first night there, she went to the animal shelter
and came home with a puppy that somehow righted the world. Everything
seemed good and true.

A few years later, I met M. When we moved in together, my Bronte dog
decided that she loved him best. I wasn’t too hurt, but felt that what
we really needed was a cat. We went to the shelter and Bartleby chose
us by sticking his paw out and snagging my skirt. He wasn’t as small
and fluffy as I had imagined him, but he was definitely the missing
piece to our little family. We brought him home and let him out of the
carrier. The cat and dog took one sniff of each other and became the
fastest friends.

Both of these animals have since past on. That little apartment where
we once resided is but a tiny memory. Now we live in house, with a boy
and a dog for each of us. When T begged for his own pup a few years
ago, there was really no way to say anything but yes. I couldn’t allow
him to feel my same sadness. I get how necessary these animals are to
our well being; which is why we have a cat as well. CS Lewis, a feral
cat who was hit by a car and came to live here, as King of the Dogs.
He thinks of them as his posse. He spends his days watching wildlife
out of the windows. Bird TV, Squirrel TV, Chipmunk TV, there’s always
something on in one of the rooms. He is unlike any cat I have ever
encountered, with a goofy personality all his own. Dogs are such sweet
and dear companions. But they cannot purr, jump up on the sink to
greet you, rub their long tails around your legs or up and down those
windowpanes. For that, my dears—you need a cat.