a ~ Shall I say, I have gone at dusk through narrow streets 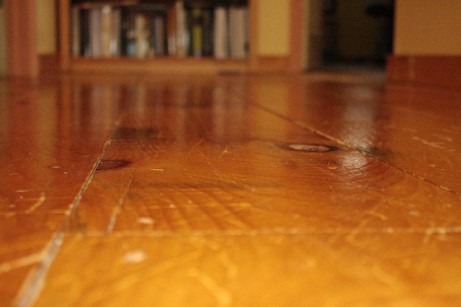 Most of our floorboards were cut from trees that we cleared to make the horse paddock. (We were not always overly tired parents struggling to remember to run the dishwasher every night. We used to have energy. We used to have Grand Plans. We used to have very long conversations. I don’t remember what about.)

When we moved here it was with the understanding that we’d have a horse or two. We suddenly had land, but most of it was wooded. To solve the problem, M bought a chainsaw and we took a walk in the woods. When it began to snow – the first snow of the season, our first snow since moving here from Atlanta, where it rarely snowed – we kept going, sawing down the trees where it seemed to make sense. We had no plan, except the one for horses and lifelong happiness. At the end of the day we decided it might be wise to seek expert counsel.

The brothers down the road cut down the trees and the man two roads over removed the stumps and another man came with a portable sawmill to cut the logs into boards. He was an interesting man. He had some sickness that left fatty deposits under the skin of his wrists and if I hadn’t been a victim of crippling shyness back then I would have asked him if they hurt, if he’d every cut one off out of curiosity, if it bothered him when people looked at him. I don’t remember his name or where he was from. Just his lumpy wrists and his good-natured annoyance when bullets ruined his saw. Which happened twice. We learned later, from the neighbors, that the man who lived here before us used to stand on his porch and shoot into the woods. His left-behind bullets cost us some money.

I like that our floors came from our land. When we are gone and the house has served its purpose it will rot back into the ground and those boards will become the earth and give rise to more trees. (All assuming we don’t suffer global catastrophe beforehand.) I like the thought of this house as a seed. Of all of us as seeds.

Today’s Valentine spirit is paled slightly because of a dead guinea pig. She was oldish; it was a normal death. But the children are sad. Tonight we’ll have a burial in the garden. We’ll lay her down with some shavings, a carrot, some hay. Maybe someone will recite a few lines of a poem. And then we’ll have ice cream sundaes to mark both occasions, the day of love and the day of death. Maybe we’ll eat our sundaes in a circle on the floor, where, when you have small kids, many celebrations seem to occur.