b ~ And watched the smoke that rises from the pipes 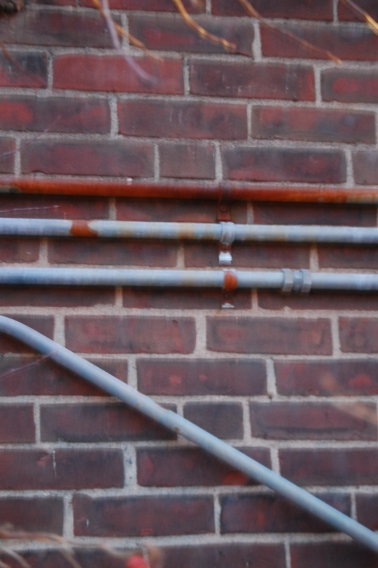 Monday morning our computer was in need of some critical care. I
attempted the impossible, but the images I wanted did not magically
appear from the printer– no matter how insistently I pushed. As I
stood from the chair, the movement from outside the window captured my
attention. It was a fox, sniffing the shrubs as if he owned them. I
asked T to quietly but quickly go and get my camera. I have always
felt an affinity with the fox, and counted myself lucky to have
witnessed such a scene. But before he could return, the creature
ambled off down the hill. That was when my son gave me this bit of
wisdom. “That’s the thing about Nature, it just don’t stand still when
you want it to.”  It reminded me of Dowager Countess’s quote from
Downton the night before: “That’s the thing about Nature, there’s just
so much of it.”

And here in Vermont we are blessed with an abundance of it. My short
drive to work is picturesque and photo-worthy in most every season. As
the light changes, I see trees and fields and hills that make an image
just begging to be captured.  I find it hard to resist its pull.

But when do you stop seeing the beauty all around? When do you become
blind to what’s in front of you? How many times can you photograph the
same tree?

I find that stepping out of my life often reenergizes me. While I am
in this new space I tend to focus on the smallest of details. When I
am in an urban setting I see so much that excites me. Lines and
patterns catch my eye; the vertical, horizontal, and diagonal
bisecting, crisscrossing and dividing each other like ropes at play.
There are always dozens of cars parked up and down the streets,
representing every color of the crayon box. Stairs that lead up and
up, maybe to a rooftop garden party. A rooftop that would provide one
with a grand view of the lights, the surroundings, the other buildings
that want to touch the sky.

A recent walk brought me too a pipe that stood stories high. There was
smoke pouring forth, crescendoing into a heart shape; its beauty was
fleeting. But the rust I noticed on railings and stairs was comforting
that day. I took note of the disintegrating, the decay. It spoke to
me, saying “I have been here longer than you, before you were even
thought of.” There is a beauty in the crumble, the color of the
oxidation vibrant against the backdrop. Those colors struck a chord
with me. Like a fox, loping down a street, refusing to be
photographed. Insisting that I write it down and remember.