a ~ Of lonely men in shirt-sleeves, leaning out of windows?… 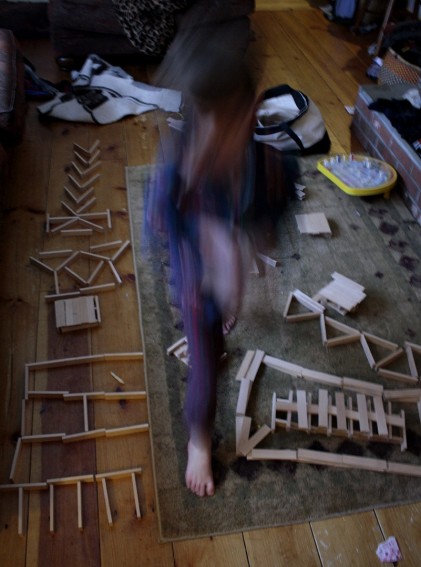 My youngest might be my loneliest. The middle boy, he’s rarely alone and, anyway, is blessed with that enviable ability to befriend whomever he happens to be next to. The oldest – his natural state is aloneness (even surrounded by so many brothers) and doesn’t quite understand the concept of loneliness. If you asked him if was lonely, he’s gaze at you with eyes not quite focused and say, thoughtfully, “No. Are we done? I need to go have my alone time.” Woe to thee who follow.

But B was born in a room full of people and it’s only gotten more crowded. So when he has no one to play with – Thursdays, mostly – it feels bizarre to him. Unnatural. And then he turns to me. “Let’s play that I’m Scooby Doo and you can be Daphne and the Blue Blahblahblah is chasing us and Fred has to set a trap.” Dear boy. At least he didn’t make me be Velma. Yes, a major part of me often chooses beauty over brains. Though you’d never guess that from my wardrobe.

And so we play, me with half an ear on the washing machine buzzer, half an eye on the soup cooking on the stove, half a brain on an article buzzing at me from my laptop. I do make an effort, I really do, but it’s not enough of one and B always suspects my lack of heart. “No, Mommy. Not like that. Like THIS.” And we begin all over again.

Once in a while, though, I find him occupied all by his small self. Today it was planks on the floor. He built several wondrous creations: tunnels, huts, arrows, towers. All of us, even grudging brothers, ogled the shapes that resulted from B’s hand/brain collaboration. We were impressed. The dogs were not. They wanted a walk, and when an adult breezed near the door they reacted with exuberant hope, and the planks were scattered. Shrieking ensued. Lessons about the fragility of art were learned. Tears were shed. Stories were read. Bedtimes were early.