a ~ Full of high sentence, but a bit obtuse; 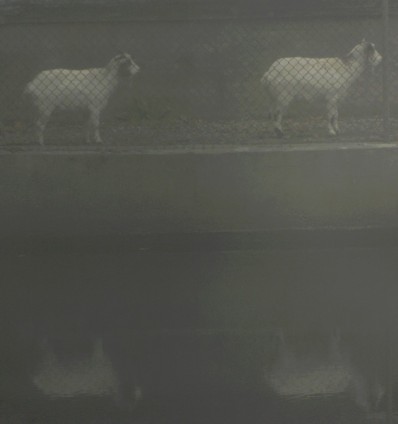 A foggy morning walk. I saw firetrucks, other people’s backyards, and goats. The goats were across a fast river, behind a chain link fence. On some sort of walkway between there and there on the side of an old mill. A strange place to keep your goat.

I saw them before, a few years ago. I watched a woman who could’ve been a time/space traveler from 19th century Russia, a peasant wearing too many coats who’d lost her way and wound up here in almost-modern small town New Hampshire. She fed the goats, spread some hay on what I assume is a cement floor, muttered and kept her head down.

I asked around – no one could tell me about the goats in the old mill.

I don’t take many walks along that route. I haven’t been back in a while. But this week I had a morning to spare, and I brought my camera because the fog has been thick and insistent these past few days, and there they were. Two goats, waiting for the sun to rise high enough to reach their pen.

I have no conclusions. No projections. The goats don’t seem distressed by their living conditions. Who knows, perhaps just out of my limited site a bed of quilts and straw awaits their tired forms. Beloved pets? Kept for milk? Meat? Protection? Perhaps they’re attack goats and I’m lucky a river lies between us.

Regardless, they were a comforting vision this foggy morning. That something unusual like goats in an abandoned mill can last beyond the first sighting. That goats can be enduring. It gives me hope.