b ~ I shall wear white flannel trousers, and walk upon the beach. 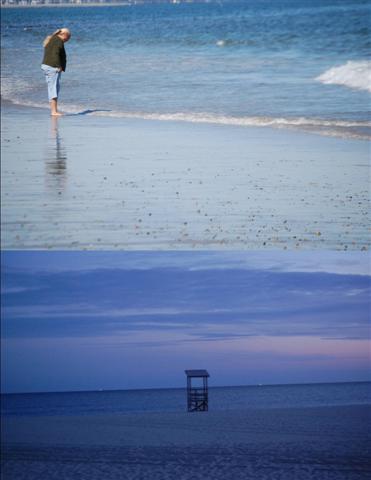 Each year my family and I try to make several pilgrimages to the beach. Somehow I am the truest version of myself when I am standing alone on the sand with only the waves a witness. They have seen me happy and joyful, ponderous and wondering, occasionally anxious and scared. Standing there I am grounded solid, preparing myself for whatever is to come next.

This last vacation, M and I snuck to the beach one night it was cold and too dark for photos but I snapped a few anyway capturing texture and mood, the blurriness of the shot mirroring the way I was feeling. The solitude that surrounds you on a beach is a sanctuary that cocoons and comforts.

The vacation only lasted a few days and was over way too soon. Before leaving our friend’s house and heading home we made one more visit to th ocean. We often squeeze in this final farewell, using it as a chance to say goodbye and preserve the sounds and smells until we come back. There I saw a woman with a white braid trailing down her back. She waded into the sea put her palms down and rubbed the water into her face. I saw this act as somewhat sacred. Perhaps she was scrubbing clean, communing, maybe a baptism of sorts. It was surely a spiritual connection with the water. I admired her hair, the life that she led and the wisdom she possessed. The kind that comes with living a long life.

When I came home I shared this story with a friend who told me of a similar experience a woman she admired from afar. It reminded me of that phrase “to one person you may be the world.”

How do we know whose lives we affect and to what magnitude? Think of the people you see maybe on a regular basis people whose name you don’t know but they occupy a space in your day your week; or maybe the connection was but for a moment, like the man I saw on the street corner in Paris. We will most likely never meet again, but I think of these people often –in their own quiet way they inspire me.

The thought of standing at the ocean is often what keeps me going when the going gets rough in the day-to-day living. The water is a constant source of inspiration and the muse behind my latest story.

An excerpt from “All The Little Fishes”:

I had always wanted to see the ocean, but not if it meant giving up my
home, my friends and everything I had even known. I had never heard
the waves crashing on the shore, but I swear it was the sound of the
sea that played in my head at night, rocking me to sleep. With Papa
gone, here, finally, was my chance to find out, but at what cost?

See, I live in Ohio with my parents and my little brother. We are the
Buckeye State, home to: Cedar Point, The Rock and Roll Hall of Fame,
The Cincinnati Zoo, and The Cleveland Indians. Also: Case Western
University and Sea World. The former is where my parents have taught
for years, the latter is a family attraction featuring whales, otters,
seals and penguins. My parents went there–so the story goes–on one of
their first dates and my dad paid to have the pearl divers go down and
get her a treasure. She says that’s when she fell in love with him.
She knew it was too early, their feelings too fresh and fragile, but
she thought there was something sweet and solid about him. She wears
the pearl around her neck on a silver chain, I’ve never seen her
without it. I wonder if her students ever notice it dangling there
while she is lecturing? Will they even think of it when there’s
another professor in front of them extolling the virtues of Lolita and
Moby Dick? I don’t think my dad’s students will miss the oyster shell
in the clear box that he kept on his desk. How were they to know its
significance, hidden amidst all the other scientific keepsakes?

Maybe I should I say used to live here in Ohio. It’s hard to think
about leaving behind the things you love. Or maybe love is too strong
a word, familiar is more appropriate and I am nothing if not exact
when it comes to words.

For as long as I can remember, words have always been a passion of
mine. The exactness of finding just the right one, like a puzzle piece
that snaps into place.  That little click is so satisfying that then
you move on to the next and when you’re done you can stand back and
admire what you’ve created. At least that’s how it used to be, before
it all came crashing down–like little brothers who get their kicks
from tilting the card table and watching the pieces fly away from each
other.

I can’t imagine my brother would do such a thing. Well, maybe when he
was a little squirt. My parents brought him home when I was 8,
coincidentally the same age he is now. I wonder how he would react to
having a younger brother and sister come and take all the attention?
Not that I could really make sense of any of that at the time. And
besides, my parents are too old to be having any more babies; right
now they’re focusing their attention on my grandfather’s memorial
service and having all of our stuff moved to his house. I was only
there once. I guess it must have been right before Homer was born. I
remember the porch and how the house was surrounded with green plants
and trees, some of which I had never seen before. I think it was right
around the holidays because when we came home I had a few days before
I went back to school. I couldn’t get over the snow in our yard,
especially since I had just spent a week in the sun. It almost seemed
a cruel trick. I remember I kept opening the door expecting it to be
green again, my mom yelled at me to stop letting all the snow blow
into the livingroom. I haven’t thought about that in years.

Now here we were going back to it. I’d grown used to the snow and all
the seasons really. They were so separate and distinct from each
other. The air smelled different in the Fall–which was truly my
favorite–but it was the falling that got to me. In the Winter it was
fun to drive in the car when it was snowing; it felt like a video game
in which you need to make your way carefully through the levels. In
the Spring I loved the flower petals that would shake off the trees.
You could stand underneath and then walk away feeling decorated with
sprinkles or sparkles; a touch of something out of the ordinary but
beautiful. In the Summer the rainstorms were best watched from
someplace dry, like a treehouse or cabin. When the rain came sideways
it seemed otherworldly. But in the Fall the gold leaves tumbling from
the trees would catch my attention. It looked like the tree was
putting on a show. I have often been filled with the desire to film
something like that. Maybe to play it back in slow motion and just
watch each leaf spiral down; all of them together performing a
graceful ballet to the ground. Now everyday will look the same, a
carbon copy of the day before. Perhaps they have a factory in
California that just churns out days, always sunny, because why mess
with perfection? It should be stunning and gorgeous every day, or so
you would think.

My little brother Homer, or Sport as I sometimes call him, seems happy
enough to be moving out west. His friends seem excited for him. Maybe
it’s because they think of the West in terms of the desert—cowboys,
cactuses and painted horses can seem exotic if it’s not your life. I
don’t think he understands how far away we’ll be. Sure there are
planes and traveling that way is fast and easy, but if we’ve only been
out once since I remember. I don’t think it’s as quick or as much of
an option as everyone says.And I don’t know what it will be like when
he’s out there and his friends are here. But then again he’s Homer. He
makes friends wherever he goes. Me, well, not so much.