a ~ After the sunsets and the dooryards and the sprinkled streets, 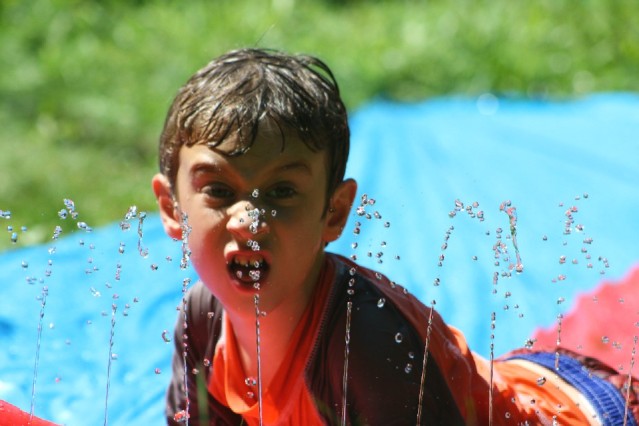 I’m not shopper. I mean, I’m not bad at it, but I rarely take pleasure in it. There’s the whole money thing, the stuff thing, the environmental thing, the space thing, the driving thing, the interacting with zombies thing – I’d rather stay home and listen to the lack of breeze.

But, we only have two fans, and we have three bedrooms, an even I can see the math doesn’t equate. So, today, armed with two young children, I ventured into the paved, seething metropolis of West Leb to procure another fan. And came home with bags and bags of stuff. It was so damn fun.

I bought Q tips, spoons, a popsicle mold, new sheets for our bed (I discovered last night that our last fitted king sheet has worn right through; our new ones are orange) sun block that doesn’t smell like baby aspirin, bubble bath, juice packs, and a Slip and Slide.

Did you ever have a Slip and Slide? My parents, like me, were not fans of buying stuff and as a result my childhood was unpopulated by Cabbage Patch Kids and swing sets, but they did, one summer, invest in a Slip and Slide and now summer doesn’t really feel like summer until that smell of hot plastic sprinkled with hose water hits my nose. Slip and Slides – they’re beautiful, man.

And now we have one. We’ve had them before; they’re fairly flimsy and my boys are, well, rough like kidney stones, so it’s been a few seasons since we’ve had one in working condition. Today has been a blast. They’ve raced, they’ve splashed, they’ve fallen and bounced their head on the ground. Luckily, it’s been a while since I mowed and there’s plenty of padding out there. These kids, my kids, are beautiful in the splashy sun. Even the cars driving by on our street, slowed by the sight of boys shooting across a plastic spread of delicious heaven, think so.