b ~ After the sunsets and the dooryards and the sprinkled streets, 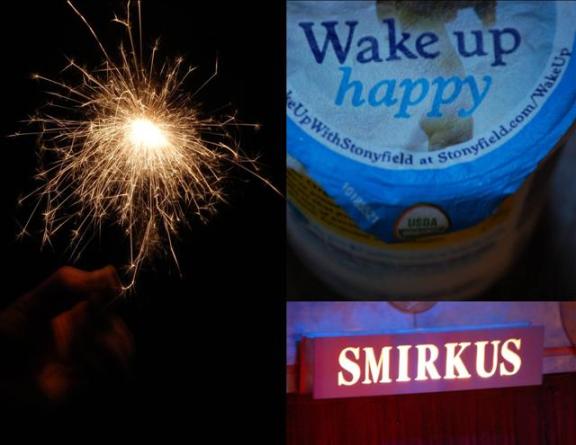 We’ve finally arrived at the best part of the year. If you were to ask M his favorite season he would answer back without blinking an eye—Circus Season. Last week we picked T up from camp where he was a counselor. We got there early enough to watch his young ones perform at the end of session show. During that hour M and I cheered, clapped and cried. It didn’t matter that they weren’t our kids in the ring. There’s something about that earnest look of excitement and that sincere, raw enthusiasm that makes you want to cheer loudly as they attempt the aerials, or drop a club while juggling.

That show marked the beginning, it’s just the first of many we will see this year. Last night both my guys attended a coach’s performance here in town, it featured alumni and a member of the Big  Apple Circus. Apparently it made such an impact, that I’ve now been informed that both M and T will be participating next week. In the weeks to follow there’s another coach’s show coming up a few towns over, then T will have several performances and we’re helping out with Smirkus for a few shows while they are in town and then we will see one of the last shows of the tour near the end of August. Dare I say it, we’ve got Circus Fever.

It’s a short season–lasting less than a few weeks–but it brings the men in my house such joy. When it’s over there will be sadness;  but my husband is known to live by this motto, or at least offer it up  to console me. (Often, it seems.) “ Don’t cry because it’s over, smile because it happened.” I sometimes feel I should try to live my life guided by the words of Dr. Seuss.

What would that be like? Would I be happier, lighter? It would certainly be more colorful, silly; perhaps I would be more prone to rhyme and a cadence in my speech. That would surely bring smiles to those around me. I could be the star of the Children’s Library, children would flock from far and wide to see me. Oh those silly librarian fantasies…

If M had to live out a Seuss book,I know he would  choose “If I Ran the Circus.” The thought excites him, I’m sure. I love to see the look of joy on M’s face when he’s about to step through the tent opening to the circus show within. He’s like a little kid being given the Crackerjack prize. His eyes sparkle as the empty ring fills with daring feats and outrageous acrobatics. The music, the lights, the popcorn…

I like Circus, but it doesn’t thrill me. For me, Summer is all about fireworks. There’s nothing sadder than a girl on July 5th, already anticipating where to watch the show the following year. Now I’m thinking back to the fireworks I saw with friends on the 4th. I was close enough that I could feel the explosions in my chest. It was spectacular.

Note to self: We should all look for what makes us happy and dwell there while we may. Try to live in the moment, no need to think of after. After is for later and remembering and smiling. After is for sweeping up the glitter and confetti to put in your pocket as a reminder of good times you had at the greatest show on earth.